The World's a Graveyard

Fossil graveyards found in rock layers around the world are evidence of the global Flood.

After noting in Genesis 7 that all the high hills and the mountains were covered by water and all air-breathing life on the land was swept away and perished, it should be obvious what evidence we would expect to find.
Wouldn’t we expect to find rock layers all over the earth filled with billions of dead animals and plants that were buried rapidly and fossilized in sand, mud, and lime? Of course, and that’s exactly what we find. Furthermore, even though the catastrophic geologic activity of the Flood would have waned in the immediate post-Flood period, ongoing mini-catastrophes would still have produced localized fossil deposits.


Graveyards Around the World

Countless billions of plant and animal fossils are found in extensive “graveyards” where they had to be buried rapidly on a massive scale.

Countless billions of plant and animal fossils are found in extensive “graveyards” where they had to be buried rapidly on a massive scale. Often the fine details of the creatures are exquisitely preserved.
For example, billions of straight-shelled, chambered nautiloids (figure 2) are found fossilized with other marine creatures in a 7 foot (2 m) thick layer within the Redwall Limestone of Grand Canyon (figure 1).1 This fossil graveyard stretches for 180 miles (290 km) across northern Arizona and into southern Nevada, covering an area of at least 10,500 square miles (30,000 km2). These squid-like fossils are all different sizes, from small, young nautiloids to their bigger, older relatives.


Click here to finish article:
http://www.answersingenesis.org/articles/am/v3/n2/world-graveyard
Posted by Profile at 7:45 PM No comments: 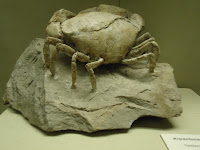 How Do Hundreds of Jellyfish Fossilize?

What a storm it must have been! News reports said that hundreds of giant jellyfish once lived about 500 million years ago, but were ‘stranded by a freakish tide or storm’ on an ancient beach. Sand later buried them, forming fossils.1,2 With many specimens measuring over 50 cm (20 in) across, these are the biggest fossil jellyfish known.

Found in a Wisconsin sandstone quarry, it must have been an extraordinary set of circumstances that preserved them, geologists say, for fossilized impressions of jellyfish, which have no skeleton or other hard parts, are extremely uncommon.3

‘Preservation of a soft-bodied organism is incredibly rare, but a whole deposit of them is like finding your own vein of gold’, said James Hagadorn, one of the paleontologists who reported the find.1,4 Also remarkable is that the rock was sandstone (i.e. the jellyfish were buried in sand which later ‘cemented’ into rock), rather than fine-grained rock like mudstone. In sand, buried jellyfish quickly break down because oxygen readily filters through interconnected air spaces between sand grains, allowing rapid decay. But in fine-grained settings, Dr Hagadorn and his colleagues explain that ‘catastrophic burial and stagnation’ inhibit decay; therefore, jellyfish are more readily preserved. ‘You never get soft bodied preservation in that kind of coarse grain size’, Hagadorn says excitedly.5 ‘When people find a T-rex, that doesn’t excite me that much, because a T-rex has bones and teeth—really easy to fossilize. But to preserve a jellyfish, that’s hard, because it has no hard parts. Something is there we don’t understand.’

To finish article go to:
http://creation.com/hundreds-of-jellyfish-fossils

BACK TO WHATS THE EVIDENCE

From the Wisconsin Quarry

Picture of waves in sandstone 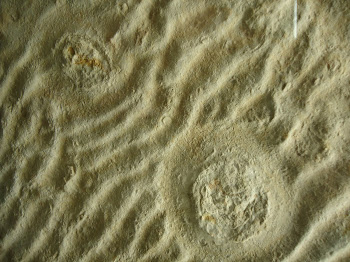 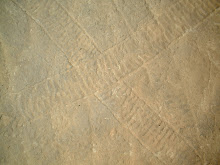 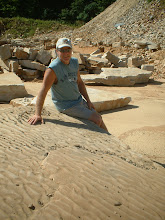 Dave in the quarry sitting on fossilized sand ripples